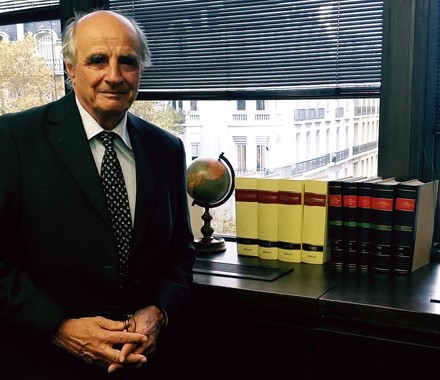 He graduated as a lawyer at Universidad Católica Argentina. He made a specialization course on Insurance Law under the direction of Dr. Morandi (University of Buenos Aires). He was founding partner of Estudio Petersen & Asociados Abogados.

During some years he taught Commercial Law at Universidad Católica Argentina.
During twenty eight years he was professor of the courses of the Training Program organized by Fores (Forum of Studies on the Administration of Justice) for lawyers on subjects such as legal clinic, court and out-of-court negotiation and agreements.
He participated in the study and implementation of the employee stock ownership plans (Programas de Propiedad Participada) provided for by the State Reform Law and as lecturer in seminars and conferences relating to this matter.
He has been director of TELECOM ARGENTINA STET-FRANCE TELECOM S.A., representing class “C” shares (allocated to the employee stock ownership plan).

He is dedicated to the general practice of law, providing comprehensive legal advice in the fields of civil, commercial and labor law in the different practice areas covered by the Firm.

He has specialized on insurance matters, also participating in the areas of corporate law, transportation, drafting, interpretation and all kind of contractual matters and related corporate problems.

We are demanding. We are proactive.

Our team of lawyers has many years of experience in the areas of law for which our clients choose us, and come from leading firms specialized on the fields on which our strength is built upon.